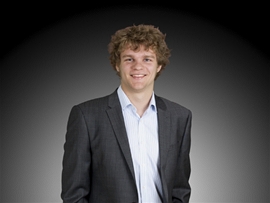 Joe was born in Guernsey and educated at La Mare de Carteret Primary School then the Grammar School where he gained 13 GCSEs at C grade and above.

He then continued on to Sixth Form and completed three A Levels in German, Economics and History in 2010.

In July 2010 Joe joined the Civil Service at the Guernsey Registry as a Registry Officer, working with both companies and intellectual property. Since joining the Registry, Joe has successfully completed the ICSA Certificate in Offshore Finance and Administration. He has also attained the ICS Service Management qualification.

Joe has also been appointed as a Deputy Greffier for limited partnerships.

In his spare time Joe enjoys cycling, running and playing table tennis for Whistlers in the Guernsey League.